During the Second World War, the dune behind Palmestranden beach, north of Frederikshavn, was the location of one of the heavy anti-aircraft batteries intended to protect the city against attack from the air.

The work to build the “Frederikshavn North” installation began in mid-April 1940, and less than a month later – on 6 May – four 8.8 cm anti-aircraft guns were in position and ready for action. These guns were subsequently replaced with more powerful armaments on three occasions, and at the time Denmark was liberated from the German occupation the battery was equipped with 10.5 cm guns.

Up until the autumn of 1942, the battery buildings consisted of wooden barracks, earthworks and a few bunkers with thin concrete walls. The first concrete bunkers with 2 metre-thick walls and roofs were completed in October 1942, and the last of a total of 13 large bunkers was finished in December 1943.

After the war, the Danish armed forces considered using the site as a permanently manned battery. These plans were later shelved, but the bunkers remained under the control of the Coastal Artillery up through the 1950s. Two munitions bunkers have since been used as depots by the Danish Civil Defence forces.

The battery area is still undeveloped, but the terrain has become so completely levelled that most of the bunkers are no longer visible. The area nevertheless remains of interest because it is the site of the only preserved armoured dome for a 6 metre-rangefinder in Denmark. In addition, the North Jutland Coastal Museum has excavated one of the gun bunkers and re-positioned one of the original 10.5 cm anti-aircraft guns. 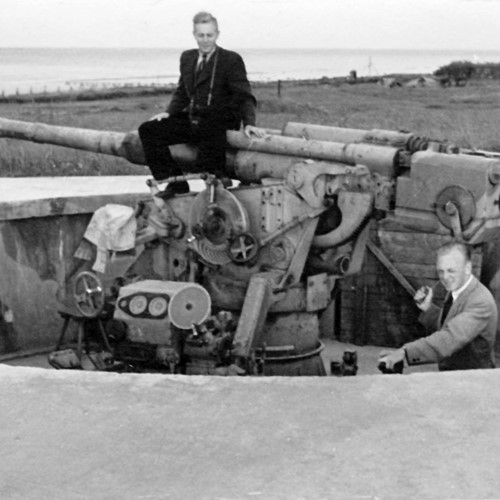